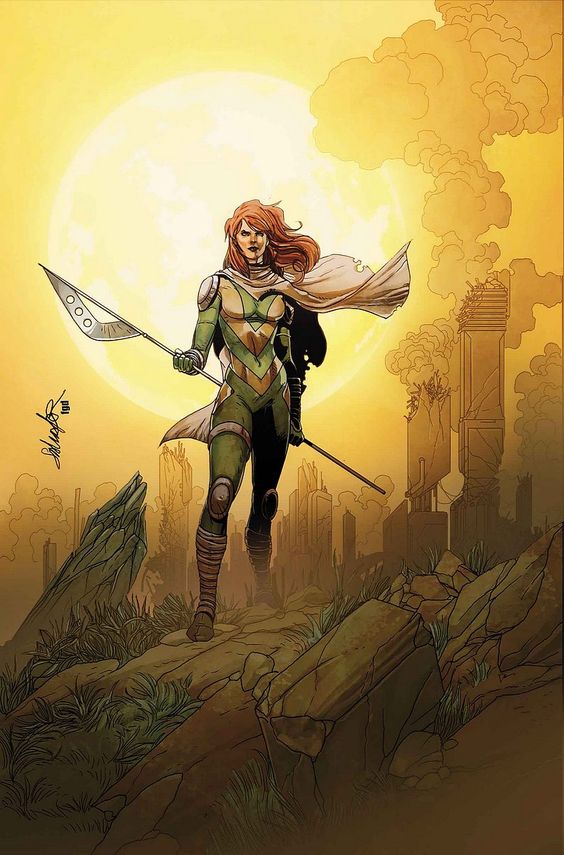 Alias(es): Forge, The Agent of Change, The Atomic Engineer, The Phoenix Princess, Hothead (Uncle only), Pumpkin ( Father only), Miss Fix-it, The Nuclear Alchemist

Jennifer is primarily an aspiring hero who attends Millennium City University at the age of 20. While having been unable to attend Millenium Academy, she has attended hero courses elsewhere. Hailing from a small -- no name town, Jen has little in the realm of anything to her name.

There are no records of any incidents caused by her. And her hero work is sparse and mostly reactionary towards incidents such as alien invasions and robberies in which she plays more minor rolls. She has once sabotaged the escape of a few bank robbers by melting the tires of those involved -- causing them to be chased by police.

Those who would peer deeper will notice her father and uncle's military background. And in speaking with her one can be quick to realize something in the realm of a discipline. Rarely are her powers used offensively, particularly against other people. And most people who are engaged by her are engaged without burns. And before the Millennium Academy, most incidents she has been involved in are of small note.

Now she attends the academy, seeking to take up a superhero career based on the training of her uncle Eric Bradshaw and taking inspiration from her father Ben Bradshaw.
Background

Helena was born a child to one Benjamin Bradshaw and to one Selena Bradshaw (Now Selena Ashwood).

At the magical and seemingly accursed age of twelve, everything in her life began to change. It began with a divorce filed by Jen's mother before her father was sent to deploy in Iraq. Leaving one Jennifer alone for some time before she went of to live with her Uncle Eric and Aunt Tabby. All the while having her powers manifest for her.

It didn't go so well at first. There was an incident. And all of a sudden Jen stopped going to school. Disappearing entirely for two entire years.

Once her dad returned, she had found her daughter had changed from when he had last seen her. The little girl he once knew had grown faster than most people her age ought to have.

The girl is attending Millenium off a scholarship granted by government-sponsored hero agency she has agreed to work for. Who also provides Jen with her equipment.


Cold Fusion
Jennifer is a being like unto a living star. Able to use nuclear energies to generate heat, flames and to mold matter

Each and every cell in her body functions as a series of nanoscale fusion reactors. And her entire physiology seems to have somehow adapted to accommodating for these immense energies generated throughout her body. This energy however seems to only be usable for her powers and abilities. And cannot be used for regulation her body's other functions. Jen is extremely resistant and for most purposes immune to most levels of heat present, able to lay on molten magma.

This system allows Jennifer to independently generate the energy for her powers, but also renders her unable to recharge her powers with anything beyond simple time. After expending all her 50 megajoules of energy -- she is incapable of generating anything more until the next day.

Heat Manipulation: Jen can generate and manipulate control the flow of heat out to a distance of about ten feet. After which her powers start to exponentially degrade.

Defense and Utility Wise, she can employ this ability to prevent things from catching on fire or even create "Safe" areas. She can use this in tandem with her "weakening" ability in the realm of her name sake to craft items out of ambient materials and then immediately cool them to make whatever it is she has in mind. Usually metals are best for this.

This also has application in preventing heat from traveling to things within her radius or in keeping things at a temperature of roughly 87 degrees F or more.

Offensively, this can obviously be used to ignite things simply with her presence or melt objects. To the point that with effort Forge can walk through walls simply by melting them. She can also apply her heat to weapons in order to enhanced their efficiency or deadlyness. Crafting heated metal spears and chains a that can easily chop through the likes of wood and other organic materials.
Flame Generation: The most immediate application of this ability is to cause ambient things to ignite. Most notably the air. And with this rapid expansion of heat formed often in the palm of her hands. The fire starts to become more and more difficult to control.

With time, Forge can learn to make different kinds of fires of different compositions to achieve different effects.

The flames Jen produces usually do not have a force element to them. Unless she specifically generates flames strong enough to propel herself (see flight.)

Propulsion: Easily the most energy consuming of all of Jennifer's powers is the ability to propel herself using jets to the point of flight. Something which she at current levels of energy can only accomplish for about 30 seconds before she completely drains all reserves of energy and must wait for it to recharge.

So rather using it to fly, Jen can use it in brief or even weaker bursts to enhance her running speed, jumping and enable her to functionally fall from any height and land safely.

The whole process is as noisy as a jetpack and can be destructive -- so it must be used carefully. Unless it is used offensively to blast/push herself and her opponents mutually away.

Plasma generation: A step above fire is the ability to generate and manipulate plasma. At these levels of exertion -- Forge begins to generate an electromagnetic field like unto that generated by a star. This allows her to shape and control the plasma into a variety of shapes within her ten foot range. Some having a varying degree of solidity.
.

.
The plasma is buoyant and ensnaring herself it can cause her to levitate, create close range weapons and other constructs. With which she can cut through most any material she encounters given time. Some faster than others. Metals often vaporize instantly before sun-like temperatures while ceramics take time.

The properties of the plasma vary with the material she uses. Most anything around her often can be vaporized and turn into plasma.

The use of plasma however tends to rapidly deplete her reserves. Much like her flight, it can often only be used for a little more than a minute at best and perhaps 30 seconds at worst. However -- it can be continuously applied through "bursts."

Elemental Transmutation: Jen is capable of accomplishing as to what people would dub as Alchemy. With time and focus, Jen can manipulate and control the atomic and molecular structures of any material she touches in what can be closely approximated to a very safe and efficient version of nuclear transmutation.

Can used in tandem with flames to generate new types of deadly chemical fires. 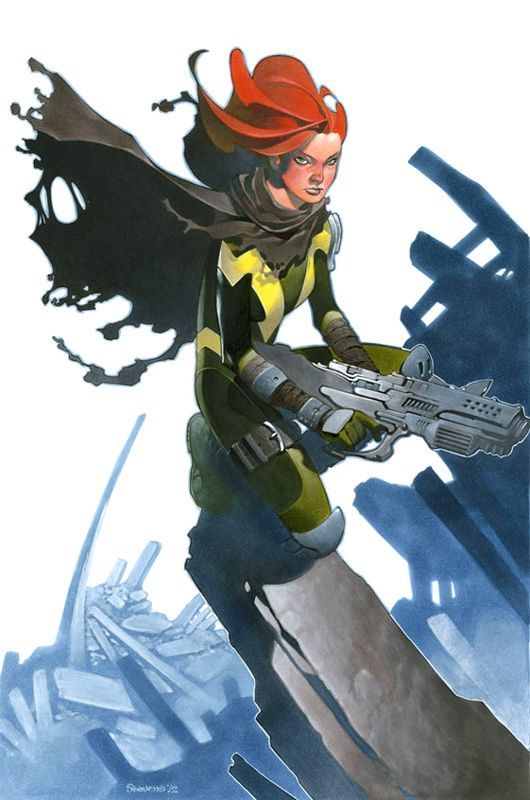 Forge's equipment is meant to be something of a project meant to mmake use of her powers.

Liquid Armor: The inclusion of a D30 Gel allows Gen a large degree of impact resistance. She is able to be struck by metahumans with superhuman strength and even hit by a car -- reducing what would otherwise by a lethal strike into a rather grievous blow.

Her armor integrates Boron Nitride Nanotubes into a lightweight Kevlar weapon to make it difficult to cut and be stabbed through. Though such strikes still do cause bruising. Her armor has the equivalent of type IIIA body armor. Making it rated out to stop most handgun rounds.

Thermo-Electric Capacitor: The converts heat and thermal energy into electrical energy for storage and use of Jen's directed energy weapons. It can also be used to power things through connections on the back of her armor. It is a mostly lightweight apparatus stored on her back and channeled into her gloves for use in her weapons.

P.E.P. (Pulsed Energy Projectile) Weaponry: Aptly nicknamed as "stun guns". These are mostly non-lethal directed energy weapons (D.E.Ws) intended for Jen's specific use. They are fueled by her powers and use electricity generated by the Helios armor in order to function. They are cooled by the Alchemical Engineer's own metahuman abilities. This makes what would normally be a complex and impractical weapon normally mounted on vhehicles able to be drastically downsized into something man-portable and highly efficient.

These weapons are able to shoot lasers which caused a small explosion of Plasma to form on the surface of the skin. This causes immense pain and the essentially "EMPs" the nervous system with a rather weapon laser. These weapons are functionally useless against inorganic/things without water objects as the lasers are tuned to work against human skin. Thusly they can be defeated easily through the use of cover body armor or anything which can otherwise serve as a shield.

In order to work they must be used with her armor. As they have no power supply or cooling apparatus of their own. They are also functionally useless underwater and suffer greatly in adverse weather conditions. Particularly in ablatives (such as sand).

Handgun: Short Barrel Configuration. The lesser capacity of this weapon makes it more adept for stunning ordinary people. Can be whipped out. Usually people hit with this just drop to the ground.

Rifle: A more powerful configuration which while a stun gun versus metahumans -- operates like a powerful kilo joules class laser guns. This is for incapacitating metahumans and can also destroy solid objects -- as well as cause things to ignite. Upon it's ligthspeed impact -- it generates a large explosion of plasma, causing a knockdown effect as people are sent back. Can generate blasts in pulses.

The weapon is able to get through most types of armor in a few shots.

An aspiring superhero with heavy military influences, Jennifer is a mutant trained to be like unto a super soldier.

Forge is a superhero with powers that are extremely lethal. However it is not her objective to kill every person she comes across. As a result -- she places a large emphasis on skill and physical fitness.

Explosive Build: Jen has a slender yet strong build befitting a power lifter. Rather than being capable of lifting the most weight -- Jen has trained herself to lift large amounts of weight quickly. This makes her very strong, surprisingly fast and very agile/flexible.

Combatives: Forge is trained in numerous hand-to-hand techniques with the purpose of non-lethally incapacitating and restraining most individuals she'd come across.
Marksman: Generally Jennifer is trained with normal weapons and is trained in how to use guns of most kinds. From handguns to bolt action rifles to even military grade assault rifles. However she is not trained in the ability to use weapons like rocket launchers and the like. Normally this isn't needed her every day life.

Her laser weapons however feature no bullet drop whatsoever. Rendering her a little bit less proficient in using regular firearms then she would like to be.

Engineer: In defiance of the often destructive nature of her abilities, Jen has some basic knowledge of architecture. She is able to at the very least be proficient in welding and has a general knowledge of building structures.
Sandbox