Hello, all! Looking forward to hopefully getting involved with some great characters here. This is a character I actually formulated for a thread on another site I frequent, but that never really ended up going anywhere. However, I liked the concept and character so much that I needed to find somewhere to put her to good use :p 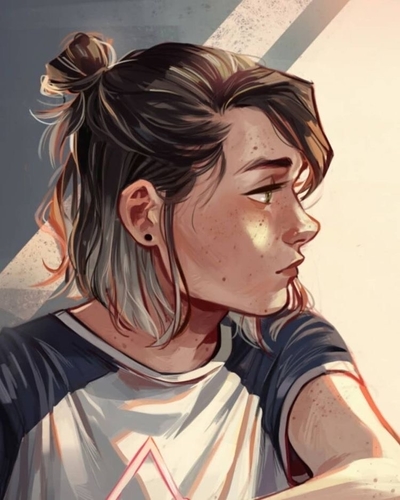 Brief Bio: Jane Arnette was born in Manhattan, and throughout much of her childhood she little suspected her life was particularly notable. She and her parents lived in a fairly run-down apartment, but then so did a great number of families in New York City, so it never bothered her. Likewise, her parents would argue every now and then, but she never witnessed any violence or anything close to it. Money was tight, work was stressful. Jane never questioned that this was normal for marriages put under that type of stress.

Eventually Jane and her mother moved to Hanover, New Hampshire from Manhattan five years ago, at the conclusion of a shaky divorce proceeding between her mother and estranged father. She'd never really cared to ask why or when it began. Her mother had begun to act strangely, withdrawn and anxious, and her father moved out of their small apartment. At 12, she did her best to downplay the effects the split up and major life changes that followed had on her, but she changed noticeably afterwards. She was less eager to learn about her new home and the kids around her.

She took after her mother apparently -- at least, that's what Julie Arnette told her daughter -- in that when things got tough she found a new creative pursuit or hobby to throw herself wholly into. It became drumming, something she had already been getting into during her middle school years and had only grown to love more heading into high school, getting the chance to be a part of a properly funded musical program.

When she and her mother left Jane's native Manhattan and moved to Hanover, it was a homecoming for her mother and a new world for Jane. The comparably tiny, quiet town was a far cry from the city that never slept, the summers less exciting and the winters just a bit colder. Jane found her own excitement in her pursuits, which her mother said Hanover's small-town serenity would allow her to focus on properly. Before her first school year in Hanover Jane had been more focused on her creative projects than actually getting to know the town and her classmates, and in Hanover she didn't really develop a social circle like she'd had in Manhattan.

Strange occurrences drew her further out of her bubble however. She first noted it when some half-hearted roughhousing ended with her shoving another drum line member into a band hall wall and leaving a noticeable indention, landing the band in a world of trouble for months. After other similar incidents around the same time -- with the last resulting in her kicking a soccer ball so hard back towards the practicing players it ended up on nearly on the other side of the field -- Jane began to suspect something was strange, and was overjoyed when she finally discovered how to manifest her abilities at 15.

It took her over a year to speak to her mother about the events, and her guardian was less than pleased to hear her daughter's dreams of leaving home and school to pursue a life putting down criminals across the country.

Her mother's staunch opposition only invigorated Jane, and after months of clandestine preparation she finally decided it was time to leave Hanover on the next bus, and find her way back to Manhattan, where she decided she would start her journey to heroism, knowing full well she'd have to dodge the consequences of her rash exit at the same time.

Personality: Outgoing and energetic, she was always in her element either perfecting her own -- admittedly very amateur stage writing -- or performing in the school's drum line at sporting events, flipping her sticks about in as much a show as she can get away with while still fulfilling her role. Intensely focused on her goals and best ways to achieve them, it is nearly impossible to deter the stubborn teen from a desire she's begun to pursue. Jane is ever the optimist, and her failures tend to fill her with an unshakeable resolve to rebound and recover, appropriate for her innate ability and an inspiration for her currently preferred dream crime-fighting alias.

She can be overzealous in pursuing her desires though, and it sometimes blinds her to the physical or emotional harm she may bring to others while chasing her goals. As she learns to manifest her powers in new ways she grows more disobedient and absent-minded, daydreaming of striking out on her own, away from sleepy Hanover to make use of her newfound abilities either as an independent vigilante or under the wings of an established hero.

Powers, Abilities, and Equipment: Kinetic Redirection -Jane's body able to redirect the kinetic energy from blows she takes and objects impacting her, be it a football hitting her palms or a fist glancing her jaw. She absorbs that force, and her body is able to amplify that kinetic energy up to four times when she deals it back, though most often she is only able to consistently multiply that force to 2-3 times what she was struck with. She is able to apply this force to her own natural blows and leaping ability, or eject it in a 15 foot sphere of force around herself.

Heat/Light redirection - Jane is able to snuff out artificial lights and flames within 20 feet, able to redirect their energy into a burning attack. She is able to project this energy from her body up to 15 feet.

Partial Kinetic Nullification - Jane has realized the ability to reduce the effect of physical blows, thrown objects, and even bullets on her body. Jane is only subject to half the kinetic force as the blow makes contact, meaning she can still be harmed by objects that are especially large or quickly traveling, like vehicles and bullets. However, she still absorbs the entirety of the kinetic energy. Bullets are still deadly against her, simply less fatal depending on caliber and weapon make.
Last edited by Illipsis on Thu Jul 23, 2020 12:17 pm, edited 1 time in total.
Top

She looks good! If you are new to Sandbox, you should come around discord as that's the place where 99% our OOC discussions happen at. It's okay if you don't wanna though. I'm sure we'll RP eventually.
Llamanati Profiles
Top

I'm pretty sure that picture is being used by Mach2 for Tremor.
Top


Baltor wrote: ↑
Thu Jul 23, 2020 11:40 am
She looks good! If you are new to Sandbox, you should come around discord as that's the place where 99% our OOC discussions happen at. It's okay if you don't wanna though. I'm sure we'll RP eventually.

Users browsing this forum: No registered users and 4 guests