Enter: The Prince of Lies

Enter: The Prince of Lies

It's wet. Her face was turned to the sky, but everything else was submerged. Some red liquid. It reeks, but it's neither dark nor thick enough to be blood. Her feet rest solidly against the floor of the shallow pool and a hand reaches out to grab the rocky edge.

Kore pulls herself up.

The base of a steep, yet short canyon. Everything's grey here and, ironically, it's chilly. Her nudity probably had something to do with that. There's an army coming like they always do, and they always stop at the edge before the drop. Hundreds? Thousands? Millions? it's hard to say. They all stare at her in reverence. It's hard to see more than a silhouette of their twisted forms. She wonders how many of them she's killed before.

They hold their arms up and toss clothing into the air that rains down into the canyon like purple snow. Apparently, even in this place, that's the color of royalty. And you start to realize just how much effort they'd been putting into averting their gaze from anything other than her face in respect for their god. Kore finds a few pieces of clothing to hide her shame before pressing forward.

They begin to move closer once she's clothed; keeping a distance of about 10 feet at all times as they watched her move. Over the horizon, his horns begin to peak out. Father. The God of this wretched land. The King of the abyss. A titan who loomed over mountains in his gargantuan form.

It took nearly a half-hour to get there, but Kore stopped moving once she could see his entire body. And she looked up to see his face. And he rose so as to speak with his daughter. 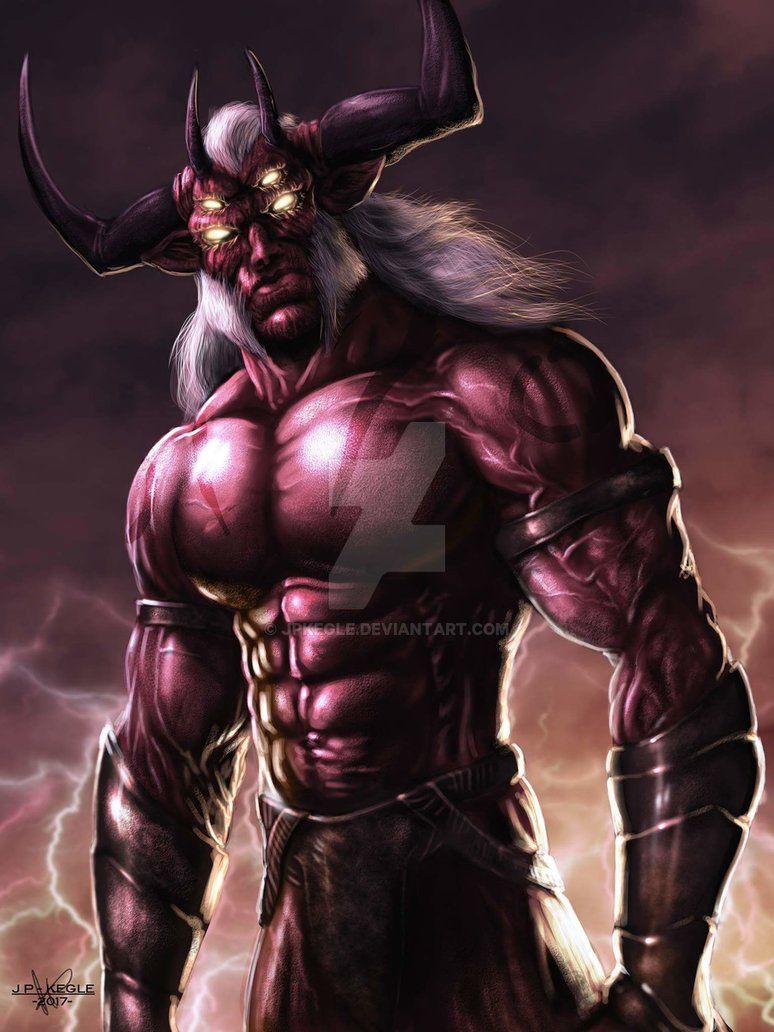 Silence. Not even the legions bearing witness to their encounter make a sound. The devil's expression is unchanged by Kore's words. She shoots some side glances to the horde surrounding them before turning her sights back onto the king.


"What? Nothing to say this time?"
"You've taught me something, Kore."
The world shook at the sound of his voice. It would've knocked Kore onto her ass is she wasn't prepared for it this time.


"What exactly would that be?"
Tears fell from the devil's eyes, though his expression would not change. And the masses began to weep alongside him, though their reactions were far more... cacophonous. Kore could hide neither her confusion nor her surprise.


"Time and time again, the humans have told me that love is painful. That it's unfair. Love has motivated scores of sinners to call my name, give tribute and plead for my grace. I don't think I understood that until I had you..."
"Oh, fuck off! You don't love me! You just want me to open the door so you can ruin my world!"
"I want what's best for you. That's what we all want down here."
"And that excuses everything that you do when you set foot in my world? YOU CAN'T TALK LIKE THAT AFTER THE THINGS YOU DO TO PEOPLE! You want me to be a become a goddamned demon!"
"You are a devil, child. Look around and bear withness to your family."
Kore fell silent as her father took a seat on his mountainous throne. Her eyes fell to her feet in spite of her father's words.


"I suppose you're still young. The blood of the apes makes you foolish at that age, doesn't it? And in this perfect era, where you don't have to hide your power, where my legions would follow your every request, where I could give you all of the happiness and freedom in the universe... you choose to make an enemy of me for it. Your hardships, struggle, fears, and loneliness; are all the results of your actions, daughter. And you will continue to suffer so long as you deny your own nature."
He wiped the few tears away from his eyes. Embracing the defeat in his heart. In a way, he was proud. Only someone of his blood could cause him so much pain.


"We have done nothing to you... though, perhaps that was my mistake. A child without discipline won't behave. And so, for failing you this long, Kore, I apologize. But it won't continue."
...

Her father's tone changed unnervingly. Kore's heart sank as his words echoed through her ears and rattled her bones.


"W-what?"
"I'm going to purge you of this poison infecting your mind. These notions of morality and ethics are simply a human construct to help them find meaning in this universe. But we... we are beyond such things, my doll. We are pure. Until you can liberate yourself, you will never find peace."
It happened so fast that Kore didn't notice at first. Maybe it was between a blink or reflected as clear as day in her eyes, but her the devil vanished. A pressure weighed heavily atop her shoulders as a shadow consumed her. And when she looked up, she saw herself reflected in the endless ocean of his soulless eyes.

Her resolve shattered. She fell to the ground, trembling with fear and unable to move an inch. And a finger, a single finger from the lord of the abyss that rivaled the skyscrapers that mankind prided themselves over, descended upon the girl and consumed her entire world.

She awoke to a familiar ceiling.

As usual, after those dreams, her heart was racing and she was covered in sweat. She turned to her left...

... and her father's face greeted her.

Her screams jolted her stepfather out of his own slumber. She flailed wildly and fought against the horror that had followed her home and into her bed; fear overriding all logic as she tried to avoid whatever end that he had come to condemn her to. But... the more she fought against it, the more she began to realize that... it wasn't real.

A projection of the image of Satan that had been carved into the back of her mind. It smelled like it and looked like him, but it was nothing more than a memory. Her stepdad barged his way into her room to find her holding the head of a devil. But, shortly after, it morphed to match his face.

What a twisted show of affection, huh? It was to be expected from a girl like that. This was just another gift from the abyss.