With a suggested standard of two paragraphs or more and dedicated lore threads, this is for the more verbose roleplayer. (10+ sentences per post, on average.)
Forum rules
Post Reply
1 post • Page 1 of 1

[OOC: Seeking Male x Female 18+ | 1 x 1 | Long-Term | Multi-Paragraph to Novella | Romance RP | Grand Admiral Thrawn | A mix or amalgamation of the Star Wars EU and Canon Storylines | If these specifications are against forum rules I am willing to take it to Discord] 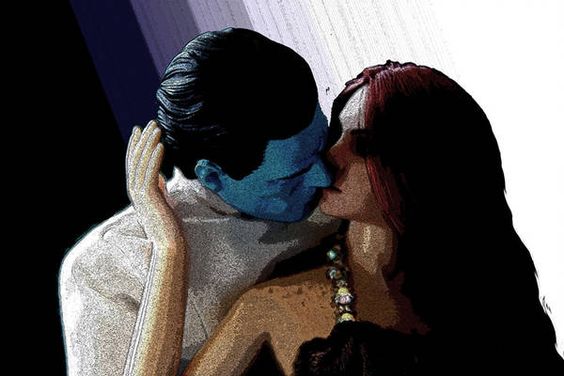 CLASSIFICATION INFO:
Faction(s): Has New Republic/Rebellion ideals but is easily swayed into servicing the Empire. Is not loyal to either, but loyal to Thrawn. If he leaves, she leaves. If he stays, she stays. No questions.
Occupation(s): Oracle Reader, Artist, and whatever can pay the rent and feed her.
Era(s):
Title(s): “The Oracle”.
Force Sensitive: Experiences time nonlinearly, has nocturnal precognizance(dreams about future events), can see into peoples’ pasts and predict their future based on energy and reading cards, can sense pain or illness in another person’s body, and can feel another’s emotions. That’s about it.

THE THEME OF THE ROLEPLAY IS:

Chiss are like werewolves - but instead of morphing into a mythical beast on the full moon, their physiology and psychology only allow them to have a single Mate their entire lives. Their DNA merges with their Life-Mate and then they're stuck. On their 39th birthday they suffer "The Mourning Year" which is basically menopause for an entire year until their 40th birthday hits. If they've not found their Mate after that year then they become sterile and impotent. So, he'd been busy his entire military career trying to win campaigns and rise in power. He nearly forgot about his body's clock that was ticking down. He hears of Honey being "The Oracle" for the Rebellion, kidnaps her, interrogates her, finds she's an artist and clairvoyant, falls in love with her, and works so hard to get her to fall in love with him so she can be his Life-Mate, even though they're two different species. Human and Chiss DNA are more compatible than other races mating, so offspring are highly likely.

THE PLOT OF THE ROLEPLAY IS:

Kaldreena was most famously known for its entertainment industry and the fact that they were the first to pioneer the color holo-vid. Honey Bailey was raised by her grandmother, Marsha Isolde, who lived as a hedge witch on the outskirts of society in their quaint little village out in the wilderness. There, Honey inherited spiritual gifts from her family that skipped generations. With her mother passing, and her father missing, she was left between worlds. Between the quiet village and the bustling, futuristic city-scape that she often visited when her aunt lived there.

Honey had the gift of predicting future events with cartomancy but when picked up by the wrong people in the metropolis, she had her gifts exploited for financial gain. She was nearly sold into slavery when she disobeyed and was rescued by the Rebellion during a raid.

Unbeknownst to her new allies, she suffered chronic headaches because of a gift she had of experiencing time nonlinearly. Intuitively, she knew what her life was from beginning to end and experienced all time, at least in her personal life, all at once. She lived in a constant state of deja vu. However, not because she was afraid of how she would die, but because of the pain of her future lover being nonexistent in the present and seeming far off in the distant future, she was able to block some of her energy centers and partially cut herself off from the Force so she could no longer remember what the future held for her.

However, through the divination of cards or energy, she was able to tell another’s future with nearly perfect accuracy. There were times, though, that she was wrong. This didn’t bother her. She always gave the best advice she could at the time.

Soon, her gifts were rumored across the Galaxy. She wasn’t known as Honey Bailey, though. In an attempt to protect her from the wrong hands, the Rebels simply gave her the title of “The Oracle”, and allowed her to do her work that way.

Having heard of her gifts from afar, the Empire took great interest in knowing who their enemy’s greatest asset was and to take possession of her. Grand Admiral Thrawn is sent on this particular campaign, has her kidnapped, and has her interrogated as such. Honey found him a lot kinder to her than the other Imperial generals were and wondered what was really in his heart under that hard exterior. He tested her abilities and found them accurate about 87% of the time and studied with her on how she could improve those odds.

In her cell, she managed to find a screw or other tiny sharp object, and etched artwork onto the walls above her cot. When they were found, the Grand Admiral was intrigued, and she received better placement and tools to continue painting. Soon, she came to respect him - understanding him much better now that they were able to talk outside of campaign drills - and secretly fell in love with him without knowing if her feelings were reciprocated. From there, she often wondered if her love was unrequited, but he treated her well. Instead, she allowed her gifts to be used at his discretion no longer taking allegiance with the New Republic or the Empire - but to Thrawn himself.

From there, our story continues…